2020 – The Ghent Altarpiece. Research and Conservation of the Lower Register

The Ghent Altarpiece. Research and Conservation of the Interior : The Lower Register

Since the beginning of the nineteenth century, generations of researchers have tried to unlock the secrets of the van Eyck brothers’ painting technique and to discern the relative contributions of the two brothers in the execution of the Altarpiece of the Mystic Lamb. In reality, this was a utopian quest, since all the panels were largely covered with overpainting, some of which was very extensive and dated back to the mid-sixteenth century!

The Mystic Lamb: a new quest

It was the conservation-restoration campaign conducted by the Royal Institute of Art Heritage since 2012 that revealed the influence of this problematic condition on the appearance of the paintings. The restorers have cleared the original surface, finally revealing the extraordinary nuances of the van Eyck brothers’ work…. The stylistic and technical paradigms of the altarpiece can now be completely reassessed in the light of these recent discoveries.

After the treatment of the shutter reverses (2012-2016), the restorers turned their attention to the lower register of the open altarpiece (2016-2019): the central panel with the Adoration of the Mystic Lamb and the shutters depicting the Knights of Christ, the Hermits and the Pilgrims. The treatment of the paint layer of these panels was particularly complex, as they show numerous compositional changes and even successive execution phases carried out by the Van Eyck brothers and their workshop. The rigorous study of these stages as part of the conservation-restoration treatment was absolutely essential in order to distinguish the Eyckian phases from later interventions and to ensure the safety of the overpainting.

During the treatment, the restorers carried out thorough technical examinations and drew on their intimate knowledge of the altarpiece paintings, developed over the course of this long project, as well as on research carried out by IRPA’s laboratories, in collaboration with the universities of Ghent and Antwerp and the National Gallery in Washington DC.

A book to remember and pass on

The exceptional visual and analytical data collected during the conservation campaign illustrate the discoveries made during the project. It is essential that the conservator-restorers and scientists who collected them publish this first-hand knowledge very quickly. Indeed, the subtle and multifaceted aspects of this unique knowledge are exploited to their full potential when this direct memory, derived from practice, is still fresh. Combined with the analysis of materials in the laboratory and an in-depth study of the historical context, the sharing of these discoveries will transcend scholarly – and popular – perceptions of Hubert and Jan van Eyck’s achievements.

The book is also an opportunity to evaluate these new findings in the context of the most recent knowledge of Jan van Eyck’s technique, produced in the course of research conducted at IRPA and abroad.

Publication of the book and presentation to the press in October 2021.

More information on the website of the Royal Institute for Cultural Heritage and on the publisher’s website. 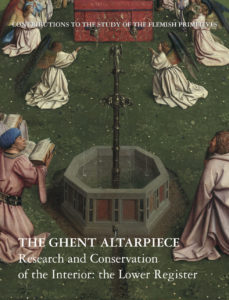